With burnout rates on the rise, some CEOs are taking matters into their own hands to improve the work-life balance of their teams. But is introducing unlimited annual leave a risky move?

Read the founder of Rise Consulting’s views and how he has seen a 25% increase in revenue and productivity, just one of the measures aimed at achieving a better work-life balance that leads to better business outcomes. Brought to you by CEO Magazine, March 2020. Author: Jessica Mudditt.

When the Founder and CEO of Rise Consulting emailed his accountant at the start of 2018 to say he would be introducing unlimited annual leave, the reply came swiftly. “He wrote back saying, ‘I think there’s been a typo. Surely you don’t mean unlimited paid leave.’ He had a fit when I told him I meant it,” says Ross Reekie. Reekie was unable to convince his accountant that having a fixed number of holiday days was “old fashioned”, and that an unlimited amount was a better alternative for today’s workforce. “He worked in big consulting firms where you bill for every minute and the more minutes you work, the more money you make. He just fundamentally didn’t understand that there was a different model out there based on results.” While the policy at Rise Consulting may be unusual, it isn’t unique. Some of the world’s high-profile multinationals offer unlimited annual leave, including Netflix, IBM, Virgin Group, HubSpot and LinkedIn. Anthony Mitchell, Co-Founder and Chief Potential Officer of Sydney-based management consultancy Bendelta, believes that offering unlimited leave can be a powerful way to attract and retain talent in a competitive marketplace. “The employee experience is of major importance when it comes to attracting people,” he says. “If you create an attractive experience that includes a consideration for people’s wellbeing and their ability to have some autonomy over how they manage their work and life, it is incredibly appealing.”

The policy can also be used to help prevent burnout, a phenomenon the World Health Organization officially defined in 2019 as an ‘occupational phenomenon.’ While rates of burnout vary according to profession, Medscape’s recent survey of 15,000 doctors in the US found that almost half were experiencing symptoms. There is a trend towards companies offering more annual leave than the legal minimum, as well as more generous parental leave schemes and even four-day weeks. Unlimited leave, however, remains uncommon.

FREE-FOR-ALL? Communications agency group Bastion Collective introduced unlimited leave in March 2017 for staff in its offices in Sydney, London, Shanghai and Los Angeles, provided they had been with the company for three years or more. Around 20 per cent of its 250 staff are eligible, and those staff now take an average of 25 days per year – an increase of about a week since the policy was introduced. “We are a modern service business and given that our work doesn’t fit into the traditional nine-to-five schedule, why should annual leave be so rigid? We wanted to empower our people to think like a business owner,” says Bastion Co-Founder and CEO (Australia) Jack Watts. Watts says that to date not a single person has abused the policy, and points to the fact that like any company, leave must be booked ahead of time and in consultation with a manager. “Our data suggests that unlimited leave doesn’t mean people don’t go for month-long European holidays. They tend to take half-days or long weekends.” Reekie agrees that putting some guidance in place prevents abuse. “It isn’t a free-for-all. We don’t go into work on Monday morning and count heads and wonder where people are, or get a text from someone at lunchtime saying, ‘By the way, I’ve gone to the Arctic Circle.” Reekie reports that productivity and revenues have increased by 25 per cent since the unlimited leave policy was introduced. However, he adds that it is one of a raft of measures aimed at achieving a better work–life balance that leads to better business outcomes.

IT WON’T ALWAYS WORK. When London-based HR software company Charlie HR was founded in 2015, it offered all its staff unlimited holiday, with no strings attached. “It just made sense to us,” says its Co-Founder and CEO Ben Gateley. “We want our team to deliver outstanding work and we trust them to take the time off they need to get that done.” But three years later, the unlimited leave policy is no more, and Gately refers to it as a “failed experiment.” “We didn’t scrap unlimited holiday because everyone slacked off work to go to Bali for six months. In fact, it’s mostly the opposite. A lot of people just weren’t taking enough holiday,” says Gateley. His team felt anxious about how much leave was appropriate to take, and ended up taking less than the legal minimum. A similar challenge occurred at Rise Consulting, where staff now take an average of six weeks leave as opposed to three weeks. Some “hyper-conscientious staff” had to be persuaded to take more leave. “It comes down to selling a culture,” says Reekie. “It’s essential to not be signalling any kind of disapproval.” Mitchell says that while it can be tempting to offer something as attention-grabbing as unlimited leave, it’s important to determine whether it will deliver value for your organisation. “I don’t think the starting point is to ask if you should introduce unlimited leave. It should be to identify the company’s value proposition. The best thing to offer may be the chance to do exciting work, or for someone to be able to say one day, ‘I was part of turning that tiny business into something amazing.’ Do something that works for your organisation.”

Brought to you by CEO Magazine, March 2020. Author: Jessica Mudditt. 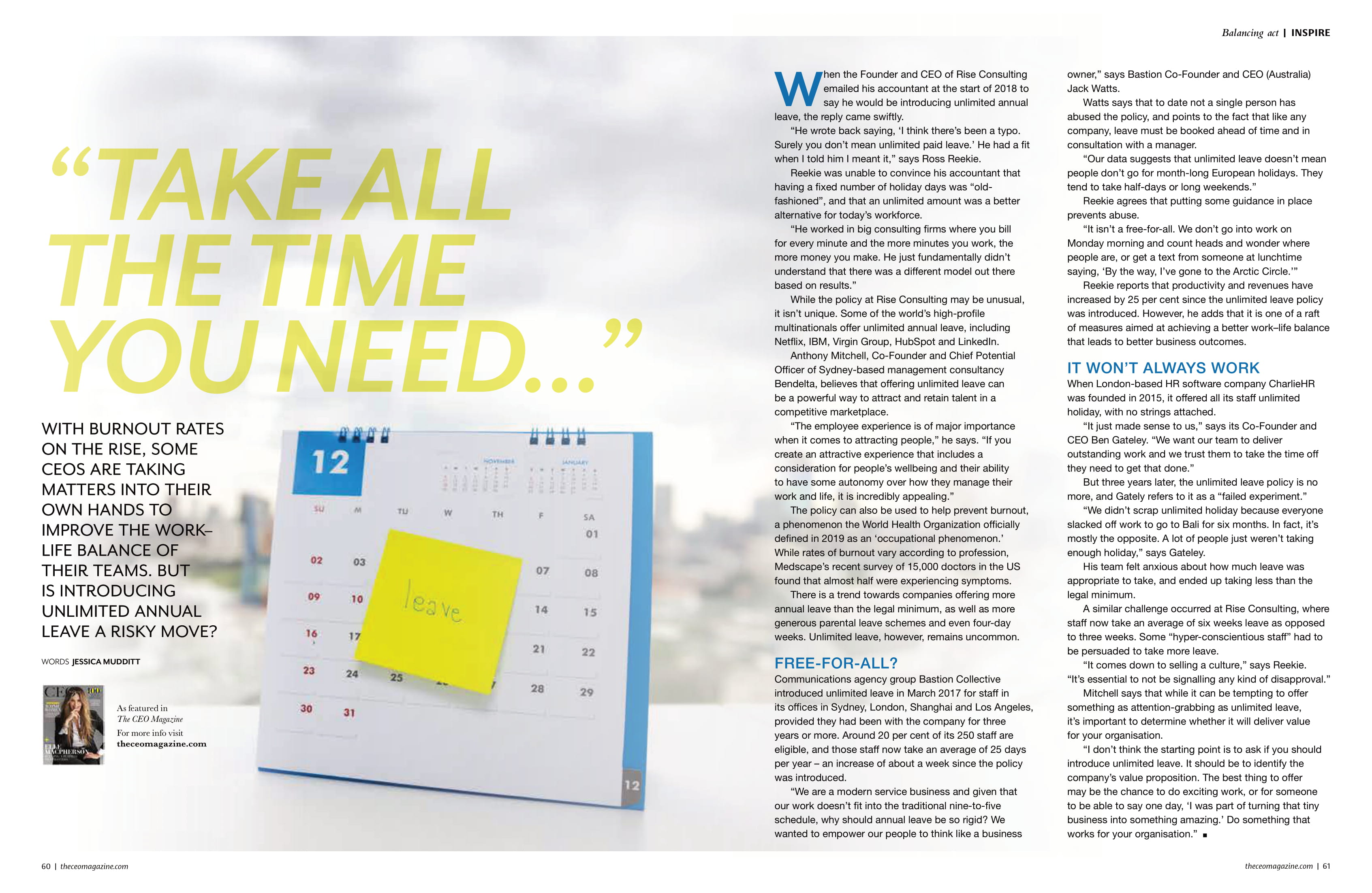 To receive our complimentary newsletter and insightful tips, join us today.

There’s a common misconception about what positive leadership, happiness at work and positive culture means. Read more about it here.

Rises’s research show that if people were happier at work, they’d be less distracted by their smartphones and other technology. Listen to Ross’s interview with David Wood @ultra106five

A happy workplace is more successful because it increases positive emotions and well-being. Read why happy companies will outperform their competitors.

Rise introduced an unlimited leave policy in early 2018. Read about how this policy impacts people’s lives in a positive way.

Rise focuses on long term happiness and fulfillment, in other words, having meaningful work. We’ve discovered there’s seven key elements that contribute to this and have developed a framework on how you can redefine your relationship with work